2022 marked the beginning of Skyweaver’s Open Beta. After a successful launch, the time has come to share what we’ve been plotting behind the scenes. 🗺️ Hero skins, card backs, stickers, spectator mode, replays, puzzles, guilds, shiny Golds, new Islands, and of course, lots of new cards!

Below you’ll find our Development Roadmap for 2022. We are committed to growing Skyweaver as a great TCG with blockchain superpowers. Since the beginning, our philosophy has been to build a great game first. When it comes to planning future Skyweaver updates, we’re driven by the question: how can we make the game more enjoyable for players? We hope you like what we have in store for you all this year 💜

Note that due to the constantly evolving nature of making a game as complex as Skyweaver, we opted for this unique roadmap structure in place of the standard quarterly columns most might be familiar with. Several of the improvements you see listed are nearly ready for production and will be released in the coming weeks. And while we’ll make every effort to launch all these features in 2022, it's possible some may carry over into the future.

From fun-loving Fun Guys to a well-fed Dracomantium, Stickers are the all-encompassing expression items in Skyweaver. You can use them to communicate during a match, in addition to the standard Hero messages. The first way to acquire these will be through the Invite-A-Friend feature (more on this later).

Throughout the year, the Heroes we’ve come to know and love will receive optional high quality skins that can be purchased or obtained via other means. The first drop is called the Eternal series and we’ll reveal full details in the coming months. We’ll also release more common (less flashy) Hero skins to ensure a diverse selection of skins are available for players.

Card backs are a great way to customize your playstyle. No matter which deck you choose, these card backs can be displayed for all to see. Just like stickers and Hero skins, card backs will be tradable. Some will be purchasable on a seasonal basis, while others will be issued for special events such as tournaments.

We are bringing back this feature—with a twist! Friends you invite will now give you points as they level up. At the end of each season (28 days in length), the points your friends award you will be converted into tradable stickers! The more points you earn, the rarer the stickers. New stickers are added every season, but once a sticker rotates out, it will never be minted again 🙀

Match replays are something we’ve been using internally for a few months, and soon, they will be available to all! Once a match is over, players will be able to go back anytime and review their most embarrassing battles, and share their greatest triumphs.

A feature often requested by our beloved tournament organizers, players will now be able to share out a link where anyone can watch their matches in-real time. That means if you're owning a match and want to show it off, tweet it out for all to see and tune in! Privacy measures will be available as well to ensure players don’t get “stream sniped” during their most important matches.

Players will be able to create and  join unique guilds. Guild members will empower each other by automatically sharing the utility of their duplicate cards. Members will also be able to vote on various things, display their allegiance with their Skytag, work together to obtain exclusive rewards, and much more.

Anyone remember those lethal puzzles we hid in some of our earlier blog posts? Well, we intend to create an environment for players (not just Horizon) to create and share their own puzzles! We may also allow players to modify certain game rules in private matches. Blitz mode anyone?

The greatest innovators in all of Sky have gathered for Kore City's annual 'Festival of Invention' with their greatest creations, each hoping to be crowned this year’s 'Architect of Invention'.

Clash of Inventors will be our first large expansion set comprising approximately 50 new cards, themed around this exciting technological contest of ideas within Sky. This expansion will build upon existing themes within Prisms in exciting new ways, like Agility using its life as a resource, Strength summoning large and powerful Units, and Intellect’s subtheme of utilizing many smaller 1 cost cards. Clash of Inventors will also feature a powerful new Trait that can be found on Units.

At the darkest corners of Sky, a new threat looms. The Hexbound scourge spreads, consuming all before them, and leaving desolation behind. Armis holds them back, but for how long?

Hexbound Invasion will be our second large expansion set, also comprising approximately 50 new cards, themed around the threat the ravenous Hexbound pose to all life in Sky, and how different factions react to this growing threat. We’ll release more details as we get Closer to Hexbound Invasion’s arrival. These two sets will become available later this year in accordance with our new card release schedule (see the Card Release Schedule section further below).

The current version of our Gold cards were never intended to be the final form. Overtime, we will make several improvements to make these feel more special and distinguished. They are cosmetics, after all, and should feel more like it. As a first enhancement, we’re adding a shiny foil effect that you can see in the following video. Please remember this is a work-in-progress and things are totally subject to change.

The animations in-game will constantly evolve to give players greater readability for each player’s actions. We also want to bring more variety, colors, and effects to make the game feel more lively while helping players better understand what’s happening on the battlefield. Here’s an example of some new animations in the works. Once again, please remember this is a work-in-progress and things are subject to change.

Islands are hard to miss, so it makes sense that some of our artists are working to improve them 😆 A new technique we recently developed will allow us to have more detailed islands and accelerate the time it takes to create new islands! Here’s a small corner of the new main island we are working on—we’re just brushing the surface with this!

We’ve had some issues with the leaderboard distribution in the past, so we needed to address them before adjusting the reward parameters. Soon, weekly Ranked Rewards will increase to match the new influx of players. We will monitor any bot or malicious activities as we progressively scale the rewards.

A common request we’ve received since Skyweaver’s Open Beta launch has been about the sound effects in-game. We’re seeking a sound designer to join our team to fully revamp our in-game sounds. We will also create new victory and loss songs as soon as we’re able to.

Older devices from four or five years ago often struggle running Skyweaver, and those that can run it smoothly see their battery drained relatively quickly. If you’ve noticed any of these performance issues, you’ll be happy to know we have some serious optimizations coming soon that should make the game more efficient.

Currently, logging into Skyweaver can take anywhere from 10 to 60 seconds, due to the slow Sequence Wallet login step. This is not only bad for players who are in a rush to play, but it offers a poor first-time user experience. Lazy Octopus 🐙 is an update we’ve been actively working on over the last few months that will make the wallet login much faster, to the benefit of all Skyweaver players.

Translating Skyweaver into multiple languages will open the doors to an endless stream of communities. We are starting with Portuguese as the first language due to several team members speaking the language, and once we feel comfortable with the process and the outcome, we will start reaching out to the community to help us translate the game into many other languages.

Allowing developers to access our API will empower our amazing community to build tools and websites for all Skyweaver players. We will release a list of API endpoints that will be open for all to access. Of course, we will accompany the release of these dev tools with the necessary documentation.

With the release of these tools, we aim to foster Skyweaver’s competitive scene and enable organizers to better manage their tournaments. This is a critical step in the path towards cultivating an esports scene for Skyweaver.

Up until now, we’ve released two mini-sets that contained 10 cards each. Starting this year, we will use the schedule detailed below and release Clash of Inventors in June followed by Hexbound Invasion in October. 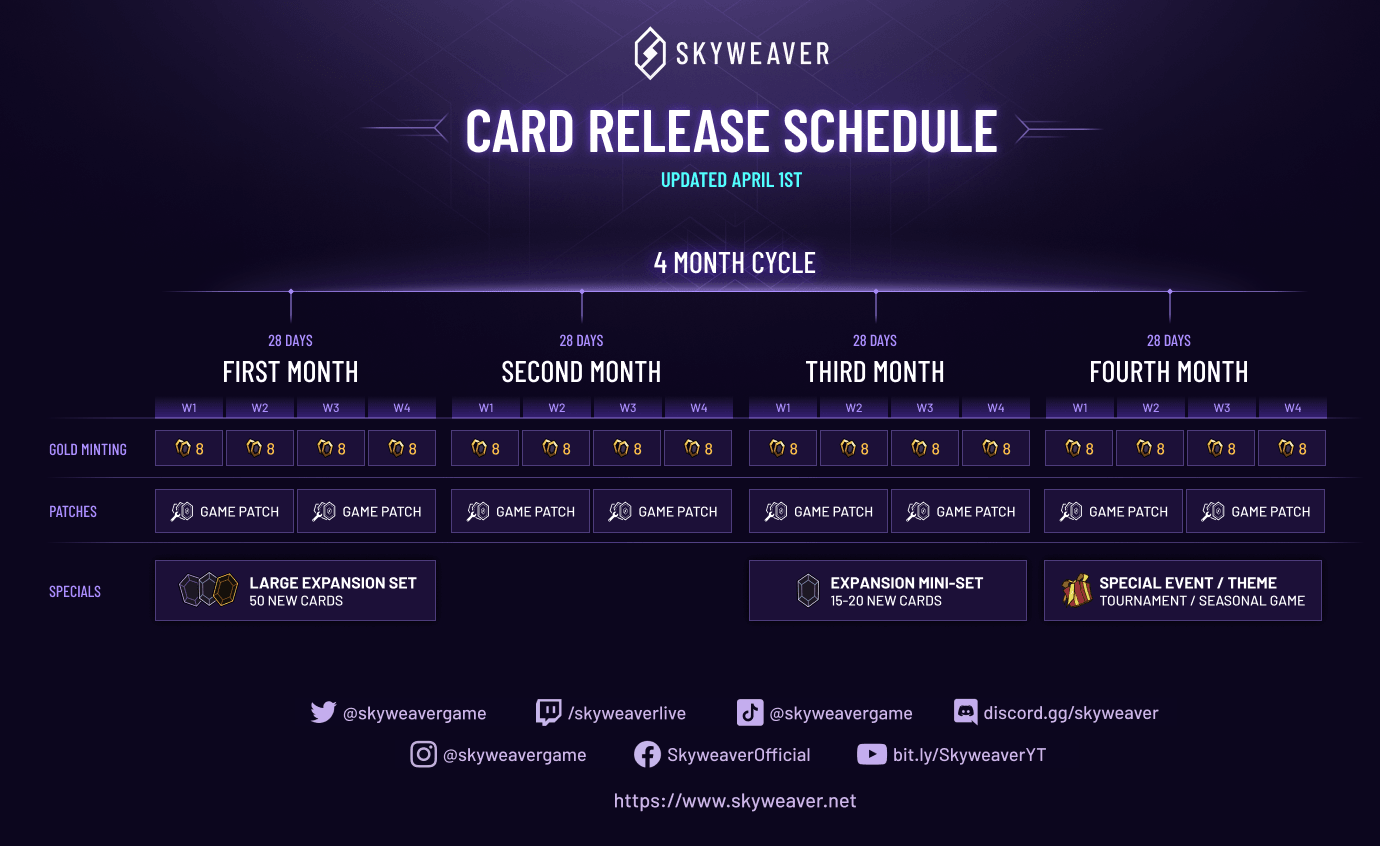 These four-month cycles exist in parallel with our monthly seasons. Seasons in Skyweaver last 28 days and trigger a soft leaderboard reset for all players.

Gold minting reflects the cadence of Gold cards available to be won through the competitive game mode Conquest. You can learn more about Gold cards, Conquest, and the Skyweaver economy using the recourses below:

Last but not least: expansion sets and special events. We already touched on the larger card expansions, so this leaves us with the last point. Some of you may remember good ol’ Krampus—our limited time holiday game mode filled with wonderful-ish gifts. If you enjoyed these playful games, you can expect to enjoy more in the future!

As a final note, in order to have 500+ cards ready in time, we had to lower our criteria when it came to card art. Several cards in-game use art that does not fit the rest of our style and will be refactored in time. We will release a spreadsheet detailing which card art is finalized and which is not very soon. Know that every new card added to the game from this point forward can be considered to have a finalized art, and hence, this section only applies to the first 500 cards that were previously released.

Oki, that's all for now!

To chat with the rest of the Horizon team and our community, join our Discord server! Subscribe to our subreddit to share your ideas, and follow the Skyweaver account on Twitter or Instagram if you just want to say hey! Skyweaver is in Open Beta and you can play free now at play.skyweaver.net.